I think it’s time to get a little real about the trail. Most of the time everything is amazing and beautiful and there’s nothing but adrenaline and endorphins running through your body. It’s not all sunshine and rainbows though. Sometimes it’s rough. Really rough. Today was one of those days.

I woke up feeling bad. I shouldn’t have stayed up so late, and I definitely should have passed on the liquid calories last night (aka alcohol). I didn’t have enough sleep, and my foot wasn’t happy.

My right foot must be larger than my left foot, because that’s where all my problems are. I was up to 5 blisters now, and this was quite upsetting. I feel like I’ve been careful and slow, and it seems like it didn’t matter at all. All my blisters were small, but they seemed to just keep coming. I wondered if it would have just been better to push myself like everyone else and get them all out of the way or something. I know that’s not how blisters work, but it felt like it.

This morning I was also starting to feel the mental drain. As much as you tell yourself it’s going to be hard and hot and gross and painful, you just don’t know how you’re going to handle it until you’re out there. And I won’t go into details about this last part, but let’s just say that there are also certain times when it’s just a little more difficult being a woman on the trail.

So this morning culminated into an uncomfortable, painful, emotional mess. We’ll just call it a cryfest, because I feel like I was crying for about an hour straight trying to get my head and body ready to continue on. Nico was extremely kind, giving me fruit and some moleskin for my blisters. He also offered to give us a ride into town the next day if we wanted to zero there at our camp and hang out. I wanted to keep going though, so we went through the slow and monotonous tasks of breaking down camp. After a long time packing up with lots of breaks to sit in the shade, it was eventually time to go.

We had almost 9 miles to get to the road where we would have more water and be able to hitch into the town of Julian. Hitching was also something I wasn’t excited about, since I had never done it before.

The walk was long and slow. And hot. Very, very hot. It was rough going, and I didn’t even remember to turn on my tracker, let alone take any pictures. As I walked I kept wondering if this was the part of the hero’s journey where I would question my decision, face my hardest challenge and want to give up, but hopefully to come out victorious on the other side. I knew it wasn’t though. I didn’t want to give up, I just wanted a break. I know there will be a day when I really do want to give up, and I don’t look forward to whatever challenge I’ll be facing that will bring me there.

I saw lots of lizards again. After the snake from yesterday I was especially wary every time I saw their scaley movement. When I told Stanley about how all the lizards were startling me I was surprised by his response.

It turns out he had only seen a handful of lizards. I was shocked, since I must have seen hundreds it felt like. I realized though that I was always in the lead, so I was always the one that came across them and scared them into the shrubs. By the time Stanley walked past the same spot they were already hiding. It was weird that I hadn’t thought of it before, and I mulled over what differences in experience we were having just based on who was leading.

Eventually we got to the road. It was a huge relief. I was feeling a little better with some ibuprofen in me, but I could tell I needed a break. We were so hot and uncomfortable, we were already deciding we wouldn’t mind spending the night in Julian. We also had service again, which was nice.

We were lucky in that we got picked up for a hitch immediately. They were a couple of archaeologists doing some surveying in the area. We learned about how they were hired any time there was big development in the area to come out and make sure it wouldn’t disturb any important sites or natural resources. I was happy to sit back and enjoy the AC while they talked.

They dropped us off in Julian and we found a place to sit in the shade and check out where we could stay for the night. The only place open was another couple of miles down the road. We held off on booking it until we went to Mom’s to see if there were any other hikers there who might already have a room somewhere.

Mom’s is a pie place that will give PCT hikers a slice and a small drink for free if they show their permits. The entire town of Julian is very hiker friendly, so most hikers stop here.

We walked through the small town and enjoyed the familiarity of civilization. People were crowding the streets walking around and eating at all the small diners. It was Saturday and the place was super busy, which would explain why there were no rooms open.

When we got to Mom’s we had the pleasant surprise of meeting up with all of our friends from Mount Laguna. They had gotten there shortly before us and we all sat together and enjoyed the food and some tea.

They told us they were staying the night with some creepy guy who had a trailer. He was also charging them all for rides back and forth from Julian, and for the place to stay and showers. We considered asking if he had more room, but they were already uneasy about it themselves, which made a hotel look even better.

Nightwalker was also there when we first arrived and we found out she was going to be staying at the hotel a couple miles down the road. This sounded more and more like the way to go, and before we left Mom’s we made up our minds and booked a room.

It makes sense now why everyone stops at all of the towns on the way. When I was planning this trip I thought it would be easy to just skip all the towns and stay on the trail. By the time you get to a town, though, you’re probably going to need to clean your feet at the very least and probably give yourself a little medical attention.

I was excited about the hotel. Very excited. We grabbed some first aid supplies and detergent from the market in town and started making our way towards the inn. We tried to hitch for a while, but the road didn’t have a great shoulder so we weren’t too hopeful. About a mile away though an older couple stopped to take us the last little bit. It was still appreciated.

We checked in and gloried in the nice clean room that we had all to ourselves this time. That of course meant stripping down and throwing all of our dirty clothes off immediately. It felt fantastic.

We spent the rest of the day doing chores, catching up on writing, and cleaning ourselves. I took a bath and a shower, which didn’t quite get all the dirt from my toenails. We also washed all our clothes in the tub as best as we could. After twice through the water was still pretty disgusting, but it was better than nothing. We hung all of our clothes around the room and messed with the AC.

Then it was time to relax. The room didn’t have cable but for some reason it had Netflix. We tried to watch some TV but had a hard time finding something interesting. I guess nothing seems that cool after being in the wild for a week.

Stanley also went to the store and we had a feast of potato chips, mashed potatoes, Spanish rice, and Oreos. I tried to eat as much as I could because I’m worried I’m not eating enough on the trail. I got to look at myself in a mirror and I was relieved to see I hadn’t burned through my fat stores yet. I gained 15 pounds for the trail because I know how easy it is to not eat enough especially the first few weeks.

Fed and clean with soft white sheets, it was an easy task to fall asleep that night. I dreamed of dry socks and sandwiches.

I know I didn’t take a lot of pics, but here’s one of Stanley enjoying his pie 🙂 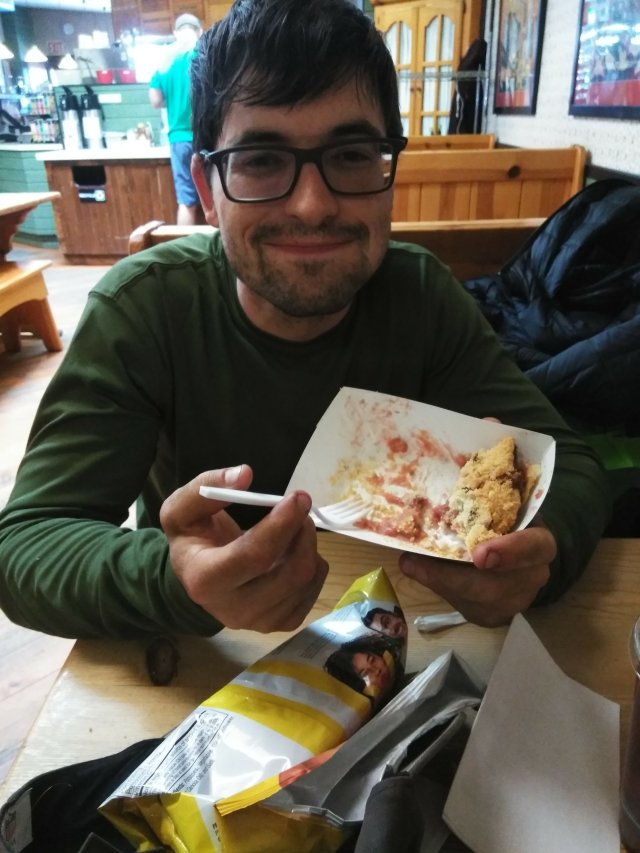